Type your search terms above and press return to see the search results.

In either an unexpectedly-expected, or expectedly-unexpected sort of way, this summer LeBron James opted out of his contract with the Miami Heat to return to the Cleveland Cavaliers, the team that originally drafted him. Cleveland is supposed to mean something to LeBron, because it’s also the general area — Akron — he’s originally from. He grew up and played his high school ball there before jumping straight to the pros as probably the most-hyped high school athlete in the history of sports media. He was that good, and to his credit he’s been the NBA’s premier player essentially since he broke into the league.

Over the last couple weeks, two juggernaut brands — Beats By Dre and Nike — which are particularly marketed towards athletes, have pulled out all the stops and made two of the most epic longform commercials you’ll see. The first, the one by Beats, debuted according to its YouTube channel on October 18th, so get into that:

It begins presumably with images of Akron, like, you know, the sky, trees and telephone wires, stoplights, before delving into the iconography of apartment complexes, fast food signs with Welcome Home LeBron written in block lettering and a movie theater with The King Returns produced on a screen where a list of movies would otherwise be advertised. In the background, in cohesion with the epic effect of slow motion, is a woman’s voice that is supposed to be James’s mother, saying:

Akron is home. This is the city that raised you. I’m so proud of you. Welcome home, son.

Then the music kicks in, some shitty song that Dre Beats is apparently trying to push, as LeBron enters his fabled high school gym. There, standing at mid-court, James looks up in reflection of his former glory. No, not the NBA titles he’s won, not the MVP trophies he earned at the highest level of professional basketball, but some green high school banners that say his school won the section and state titles way back when. Also, his jersey was retired. Imagine that!

Then the scene cuts, and all of a sudden LeBron is shirtless and notably skinnier than a few months before when the Heat were getting mopped up in the NBA Finals against San Antonio. But that’s when the hook kicks in, the Dre Beats ear buds go in, and it’s on. As James trains, it cuts back and forth between that and some home footage (that is neither LeBron nor his mom) and some home getting torn down, the opening of an empty refrigerator, and old film from when he was in high school before he and his teammates (but mostly him) stomped out other schools featuring nothing but short pimple-faced kids. Man, I’m getting emotional watching this. It’s so inspiring.

As the commercial ends, I can only assume LeBron’s workout in his old gym is finished, because he’s no longer sweating and he’s back in the sweatsuit he originally entered the gym in and the marketing campaign appears: “Reestablished 2014”.

The voice finishes the ad: Don’t ever forget where you came from.

So after that masterpiece, how are we supposed to get deeper? I’m on the verge of tears, because there’s nothing quite like slow motion to go along with watching another grown man sweat while he does resistance training.

Somehow, it gets weirder:

This commercial, from Nike, features a bit more talking, and a lot of more people.

It starts with a home Cleveland Cavaliers basketball game, with the PA announcer saying LeBron’s name as he exits the bench to head onto the floor. You see Kyrie Irving clapping with a very smug look on his face, Anderson Varejao’s hair, before LeBron calls everyone in. Then it starts:

Here we go bring it on in; it’s time now. It’s our city we gotta do it for them, dawg. We gotta do it for Cleveland they’re waiting on us. What we do tonight will define what we about. Let’s get it goin’.

Then there’s some black guy who walks onto the court, because, oh yeah I forgot there’s no security and people are allowed to do that whenever they want, and he enters the huddle, touches Kyrie’s shoulder before Irving gives him that nod like, “Oh yeah, I see you,” and then the whole crowd comes united with the team creating one gigantic huddle — which even stretches to other people in and outside the building, hand over shoulder — that seemingly goes on within the entire construct of the city of Cleveland. Also, it’s the NBA and apparently it’s a day game for some reason, because it’s light outside.

It cuts, and they start doing some chants. The whole city. That’s what it’s all about. Doing something special.

Then there’s some Hunger Games shit where everyone raises one hand and they all yell “Cleveland!”

All right, so I have to say…

Number one, these commercials were expertly made. I think if I was a 13 year-old and LeBron James was my favorite player and I saw these commercials, I’d like him even more and I would think — if I didn’t already — that he was the most rad human being who’s ever fucking lived. The hype and drama aspects of them were precise, made for universal appeal like the Derek Jeter sendoff commercial from Gatorade. It’s hard to knock the artistry.

Number two, why? Why did these commercials have to be made? Other than the bottom line, that it’s Beat By Dre and Nike advertising the #1 athlete in the world, what are they looking to accomplish? That LeBron is a good guy for returning to Cleveland?

In the more cynical universe, also known as the universe I live in, the reason(s) he returned to his original team is/are simple. There’s the money aspect (he’s getting paid the max), and there’s the fact that the Cavs are trending up while Miami was trending down. It’s a fact that Kyrie Irving, who is actually a pretty good actor if that Nike commercial taught us anything, is a budding NBA superstar. He’s already one of the two- or three-best point guards in the NBA, and he’s sure to give LeBron more scoring opportunities than his former situation in Miami, where the gameplan was basically, “Here, LeBron, do something.” They also have Kevin Love, an awesome scoring/rebounding forward. The “Big 3,” or whatever you want to call it in Cleveland, is right now better than James, Dwayne Wade and Chris Bosh were at any point in Miami.

Number three, in the second commercial why is LeBron so hell-bent on getting his teammates hyped up on winning for Cleveland? What does this shit city have to do with any of them? 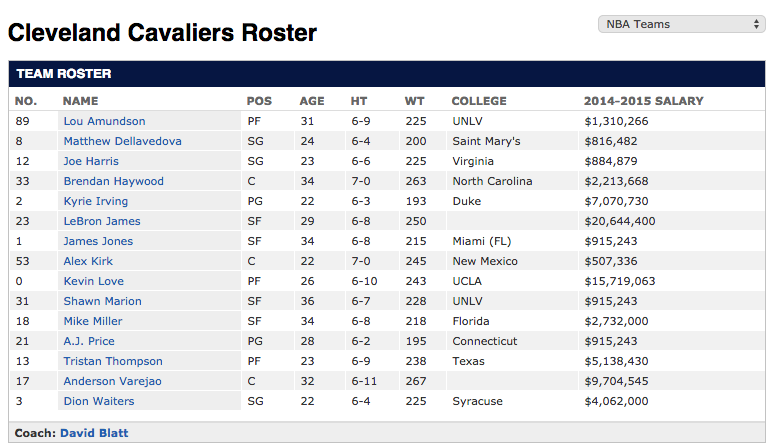 Now, where a guy goes to school isn’t indicative of where he’s from, but it can give you a pretty rough guess to which area of the country they came from. (Sometimes.) Kevin Love is from Oregon and went to UCLA, and Kyrie is from New Jersey and went to Duke, just as a couple examples.

But still, the question remains: why should Cleveland mean as much to any of them as it does to LeBron? If you look in the far right of the above spreadsheet, you’ll see how much money each player makes. That, not some special interest in a LeBron-back-to-Cleveland redemption story, is why they are with the Cavs. Money conquers all.

LeBron James is an unreal basketball talent. There’s just no way of getting around that. But I don’t need some commercials to show me a different side of him, because frankly I don’t give a shit about him unless he’s playing basketball.

You see all the time athletes doing charitable work to help others, and that’s great, but the key words there are you see. You see them because they want you to see them. They want you to know how good of people they are. It’s less about helping others than it is showing the masses how awesome that particular athlete is as a person.

It’s clear the narrative that’s going to come of LeBron’s time in Cleveland. Obviously it can’t be simple; it can’t be the fact that he’s an amazing player on a pretty damn talented roster. No. It has to be that he came home. That he did it for Cleveland.

Let’s just ignore the money he’s being paid to return home, or the talented roster he’s playing alongside.